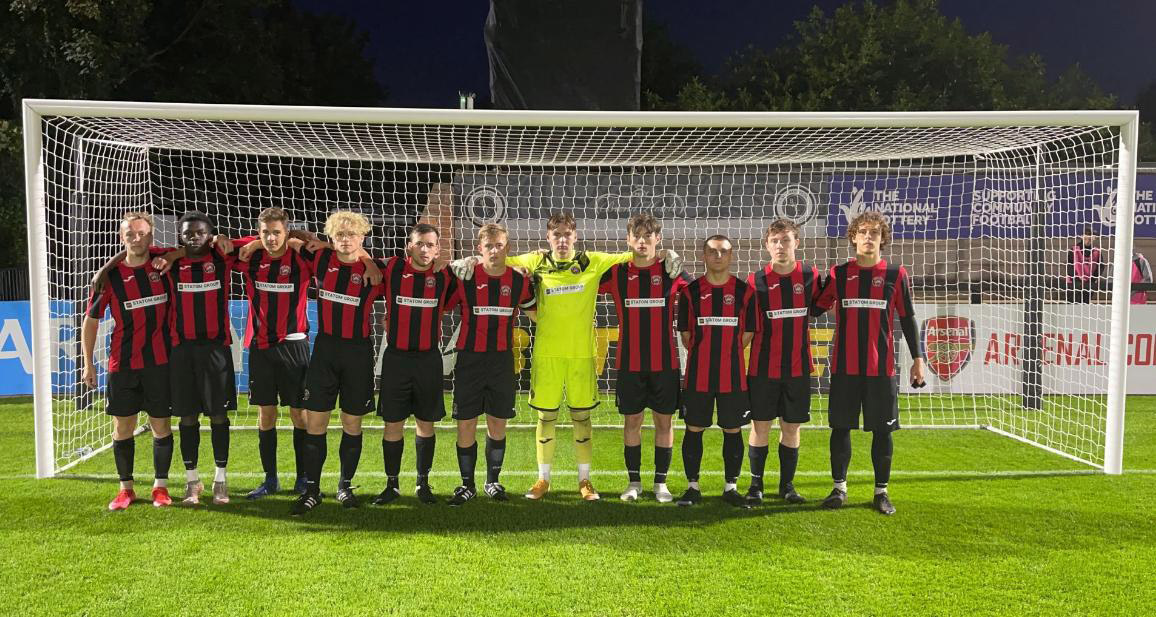 A cup run that started on a balmy Bank Holiday evening in August will extend beyond the smoke-filled skies of Halloween as The Dockers’ youngsters humbled Boreham Wood on their UEFA standard pitch on Monday night.

The Wood’s senior side are currently second in the National League, but their youth side had no answers to Metin Godze’s team.

“Enjoy the experience, you won’t play on a better pitch than this” was the advice to our young side on arrival at Meadow Park and enjoy it they did.

Jeers accompanied our keeper Hugo Webb’s first minute miss-kick, but the home fans were soon silenced as the Dockers dominated from there onwards.

Alfie Eldridge should have scored in the 10th minute but pulled his shot wide. Asanti Amoah then fired wide in the 15th minute before being denied by Wood keeper Kojosoluwa Abayoni a minute later.

Having got to half time goalless, any fears that Erith Town had missed their chance were dispelled five minutes after the break as skipper Tom Ash met a corner with a bullet header that gave Abayoni no chance.

From that moment the game was controlled by the visitors and they gave themselves breathing space twenty minutes from time as man of the match Harry Lawrence met a free kick with a header that looped over Abayoni to spark more celebrations.

Four minutes from time, Jonas Petkevicius weaved his way into the box before being brought down and picked himself up to fire home the third.

Two fine saves from the impressive Abayoni prevented further damage before the Erith Town party celebrated at the final whistle.

The next visitors to Meadow Park are Barcelona Femmes in the Women’s Champions League this evening.

They will do well to produce a performance as impressive as this.