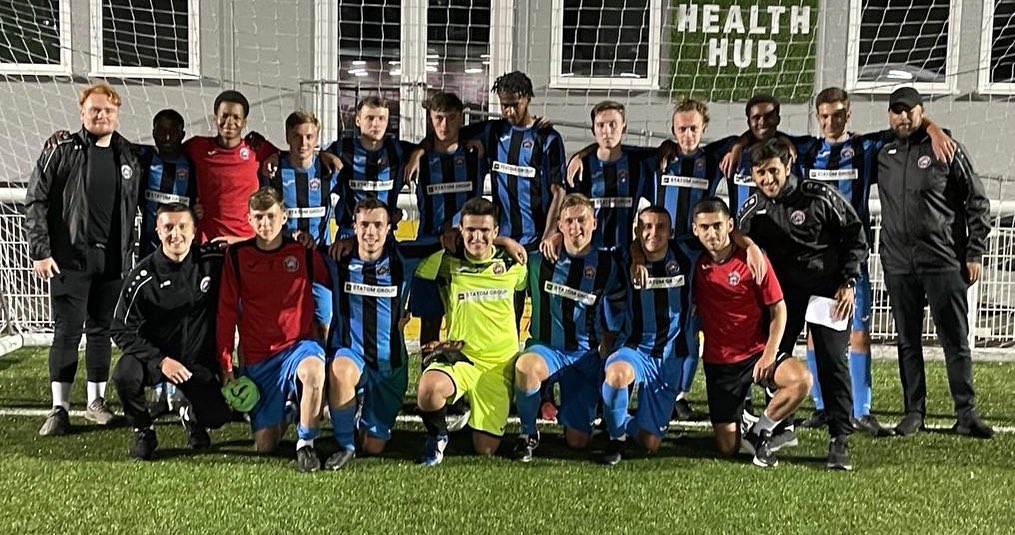 Erith Town’s Jay Baker had two good chances in the opening ten minutes, when he was played through one on one both times, but both of his efforts finished wide of the left-hand post.

Erith Town continued to dominate the opening stages/chances when Harry Lawrence bent a shot from 20 yards towards the bottom left-hand corner that was well saved by Chatham goalkeeper Charlie Sevenoaks for a corner, and David Gokon-Siakouri went for goal from the right of the box only to see his effort crash into the right-hand side netting.

It was therefore somewhat against the run of play that Chatham took the lead in the 23rd minute when a curling shot from the edge of the box by Victor Okunuga found the bottom right-hand corner to settle the young Chats’ nerves.

It was a lead, however, that only lasted seven minutes as Erith equalised when David Gokon-Siakouri did well to cut in off the left before producing a low shot into the bottom right-hand corner to restore parity in the game.

Following Chatham’s Jude Watts having two shots from 20 yards finish off target, there was a decisive moment on the stroke of half time.

With the ball already out of play for a throw, Erith Town’s Harry Turpin went in for a lunging tackle on Chatham’s Freddie Bull with referee Oliver Westgate having no hesitation in getting out his red card and reducing The Dockers to ten men for the rest of the game.

Despite being a man down, Erith Town took the lead in the 52nd minute when David Gokon-Siakouri brought down a ball from the left before finding some shooting room in the right side of the box and drilling a shot low and hard into the bottom left-hand corner.

In truth Chatham did not look like scoring in the second half with ten man Erith continuing to create the better chances.

The best of these fell the way of Aflie Eldridge when he shot wide from the edge of the box with David Gokon-Siakouri also bending an effort wide from a similar range.

Chatham did have a guilt edged chance to equalise in the third minute of second half stoppage time when a corner founds its way to Ryan Gill at the back post who knocked the ball over the bar, but it wasn’t meant to be for the Chats as Erith Town pulled off a great victory down to ten men.